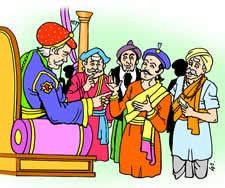 This goes back to the times when Mughals ruled the holy land of India. Akbar was withering in pain when Birbal arrived at the scene. "What happened, Your Majesty?" he asked. Akbar informed him that an unfortunate accident diced his finger off. The other Ministers, unlike Birbal were still praising the king for his greatness and buttering him while Birbal said "Jo hota hai ache ke liye hota hai" (whatever happens, happens for the good.) Offended by these nowhere consoling words of Birbal, Akbar fired him in no time. This time Birbal thought "Jo hota hai ache ke liye hota hai. I can take a break from work for a few days and take my lovely wife on a vacation" and he set-off.
In the meanwhile Akbar appointed another Minister to take Birbal's place. As usual, Akbar went deer-hunting with his clad one fine morning. Akbar and his new found minister chased a beautiful black buck and before they could hunt him down, the deer sped away. Looking back, they realized they were separated from their army of soldiers and the two were now on themselves to find a way back home. They were trying to figure out the correct path when they were caught by a local tribe. On seeing the King, they got happy. They could sacrifice the King's body and please their deity God. Just when they were about to shred the King into pieces, they noticed his cut finger. Now a tampered body cannot be put for sacrifice. So they promptly released the king and caught the Minister instead. The Minister was killed as the sacrifice King hurried back to the palace.
On arriving his palace safely, he realized that Birbal was right in every sense. He summoned him and appointed him back.

What does this little story say? Be it the little issues here and there or a huge cluster of problems hovering around your head, always remember "Jo hota hain ache liye hota hai". You may not realize it then but later when things settle down, you'll know why it was good for you. And then you might perhaps feel thankful to God that because the problem arose, you learnt to fight it, endure it and emerge out as a winner. If that situation has not arrived yet, wait, it's not the end then. :)

By the way, if you thought the above Birbal story was over, one question still remained unanswered, "How was the dismissal beneficial to Birbal in any way?" To which Birbal promptly replied with a smile, "If I were not fired, I would have been in the Minister's place and got killed today." Impressed, Akbar rewarded him handsomely.

Take a moment to remember your toughest time and another moment to figure out why it was good. I'm absolutely sure, you'll realize "Jo hota hai, ache ke liye hota hai."
at January 13, 2013
Email ThisBlogThis!Share to TwitterShare to FacebookShare to Pinterest
Labels: Getting philosophical, Inspirational, Short Story