End of the jumping jampang!

So, with no IPL match to look forward to I had no choice but dig into my pending novels to read. Sending me back to some constructive work, eh? And there it triggers my reasons-why-I-did not-like-IPL6 list:

No doubt the main motive behind IPL is building some quick cash - for the team owners, cricketers, the sponsors, all of them!
Either way, no doubt I have enjoyed the season. Let the criticism flow along. But times placing bets with your friends about your favorite teams and pulling legs when their teams lost always cherished. In fact I'll miss Gayle's spectacular play, Pollard's surprises and the rise of so many young cricketers.
at May 28, 2013 No comments:
Email ThisBlogThis!Share to TwitterShare to FacebookShare to Pinterest
Labels: Sport

They stood right in front of that huge banner which read, “World class Kite Maker”. Even before their steps entered into the shop, Veer and Kusum could catch glimpses of the variety about to be served to them. Veer, 15 was a poor farmer’s son and Kusum; his younger sister had turned 8 only today. Their mother abandoned them shortly after Kusum was born due to ill health. Kusum’s eyes gleamed as the infinitely many kites in the shop made the big shop appear small. It was nearly impossible to see all the kites in one glance.

“Which one do I take?” Veer asked his little sister. His head was in a total mess. And he was not to be blamed, for the gentle red kite reminded him of the faint memories he had of his loving mother. While the huge yellow circular one looked exactly like their pot-bellied land owner. He was favoring the kite with beautiful flower designs as it stood for Kusum, the Indian meaning of the word ‘flower’.

After a lot of argument in her head, Kusum pointed out to a rainbow colored kite. It was the most beautiful kite she had ever seen with every possible color flaunting the patterns it made. The kite maker looked at the worn out clothes of the kids and with his eyeballs rolling from top to bottom of their dress he chortled to say, “Ah that! Kid, you will not be able to afford that one.”

Veer had managed to save about 76 bucks from his daily wages at the carpenter’s shop for his beloved sister’s birthday. Earlier this morning when Veer asked her for what she wanted, she promptly expressed her wish to learn to fly a kite. But to Veer’s agony, the first kite little Kusum pointed to could not be afforded by him. Of course, he thought in his head, what was I thinking? Everything in this world comes for a price doesn’t it? Last year to get a wage appraisal I had to work for 15 days straight at the carpenter’s store, missing my Night School.

Kusum immediately realized the situation and said, “Oh bhaiyya, actually that one is too colorful. Let’s take the plain pink one instead. I really like it.” Those words hurt Veer a lot. Compromise wasn’t a word his sister was supposed to learn on her birthday. Nevertheless without any choice, they bought the pink one and left silently.

The bright green pasture behind their farm was the ideal place to fly kites. The wind was perfect and the sun glowed enough for a fun filled afternoon. A couple of other kids from nearby farms were also kite-flying. Veer with a superior feeling took the kite in his hand and tied it to the thread for flying. ‘No sooner will we be flying it’ thought Kusum enthusiastically.

Veer held the kite in his hand close to his chest and showed it to Kusum. He then said, “Baba taught flying kites to me when I was of your age. You’ll be surprised on how this colored piece of paper reflects our story.” Kusum was standing still in bewilderment. He continued anyway, “You hold the kite like this, run a bit and set the kite free in the air, giving it a little push.” He demonstrated the push in the direction of the flowing wind and let the kite fly.

It’s just like our life, isn’t it? A small bit of motivation and Lo Behold! We are makers of history. Just that little "push" and we realize how limitless the sky is. How much our potential can stretch to fulfill the wildest of dreams. Anyway, the kite flew higher and Kusum was clapping louder than ever.

"Once set for flying, you need to constantly guide the kite using the thread. That is where the skill lies. Neither too tight neither too loose", said Veer as Kusum looked straight in his eye. She looked particularly amazed as if something had just struck her head and she smiled.

Hesitation - the thread tying our lives. And surprisingly, who controls this thread? It's us ourselves! Tighten it, keep clinging to your fears and you never seize a chance to move forward. Life is at a standstill with fear creeping your mind. Loosed it too much, and you become much of a risk-taker. The ego (which later turns a habit) of letting things free snatches away your reasoning capabilities. You donot think before you leap. The control should be just right. Right enough to allow you to grow and right enough to keep you secure.

"Oh look at that blue kite brother! I want my kite to higher than that!"

Ah, this is all where it starts getting nasty. You know you've overcome the fear, you know you've got it in you. Enter competition. Moments when you want you to out run every single chap out there, for what? For just proving you're no less. What does it give you? Satisfaction, err no really no! It's greed, you beat one. You wanna beat the next. You wanna keep climbing the stairs to superiority show.

Veer loosened his grip on the thread wheel, let the kite rise while he gave it directions to flow along with the wind. The kite soared higher into the sky till only it looked like a pink aircraft gliding smoothly. Both the kids were loving it. A few children even praised Veer for his efforts and you could see him beaming. As it goes, how long can it last?

A bunch of bullies from the other end of the field couldn't tolerate the heights at which Veer's kite flew. Swoosh, a black kite came in Veer's view. The siblings had little clue of what was happening. The intentions were becoming clearer as the black kite started crossing the pink kite Kusum bought. The evil kid was trying to tie his kite's thread around Veer's in order to snap it away.

People will try to put you down. For the weak one's rise only when they suppress the strong one's. The key lies in remaining strong-headed and focused. If others are trying to sabotage you, you know you have done enough to scare them. You're that great! Think of this and build courage to come out of such a situation. If you give in and run away, you've lost the battle.

As Veer thought, he swung his arm and put in his best efforts to untangle the kite. He managed pulling it away. In the process, the black one got snapped. "Deserved it", he muttered. You don't mess with people who have reached heights with their own efforts.

As the kite kept gliding away in the sun, it became a little monotonic. The kite acquired the maximum stability it could achieve just when... A sharp change in the winds was noticed. Wind was blowing so hard, it could pierce through the kite and tear it into pieces. Veer could not have afforded to let go off the kite. He had bought it after a lot of savings. He had to do something. He rose to his feet and steered the kite in the direction of the wind. 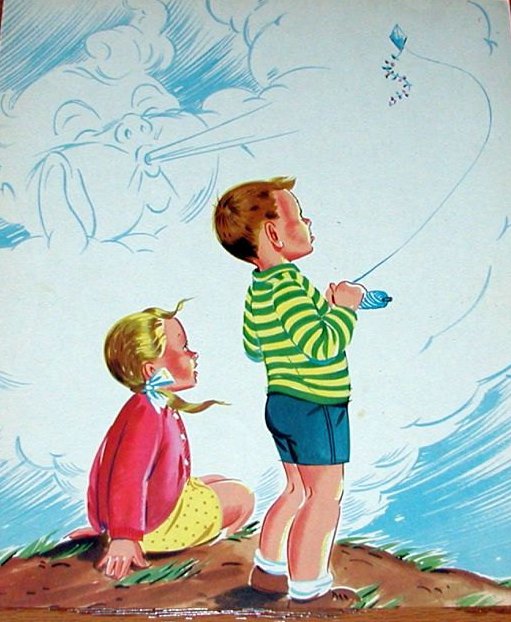 Sometimes, things are just not in our control. Destiny as we choose to name it. Whatever has to happen, will happen. Be it against your will. What are we to do in such situations? Well, just like how Veer did, adjust yourself in the situation. Find a way such that the situation gives you resources to grow. When Veer oriented his kite in the wind's direction, he simply used the wind's strength to make it fly higher. That was indeed a smart move. Had he been stubborn, the kite's true identity would be revealed - a thin piece of paper after all.

"That should be enough for the day", Veer called out to Kusum. They called the kite down slowly, wound up the thread to the wheel and headed home. Kusum was ecstatic after the whole kite-flying experience while Veer just was going home more mature a person after thought-flying...

at May 23, 2013 No comments:
Email ThisBlogThis!Share to TwitterShare to FacebookShare to Pinterest
Labels: Getting philosophical, Inspirational
Newer Posts Older Posts Home
Subscribe to: Posts (Atom)